The Vanderbeekers of 141ST Street by Karina Yan Glaser

This book was so much fun to read! It was funny, adventurous, and extremely heartwarming!

Mama and Papa live in a beautiful brownstone house in Harlem, New York. They have a set of twins, Jesse and Isa, Oliver, Hyacinth, and Laney as well as their lovable pets, Franz (Dog), George Washington (Cat), and Paganini (Rabbit). The Vanderbeekers love their home, but a few days before Christmas their landlord decides not to renew their lease. Instead of giving up and preparing to leave, the children are determined to persuade their landlord to let them stay. What will they discover about their mysterious landlord who never leaves his apartment, and is always angry? Will they be able to persuade him to let them keep their beloved brownstone?

I loved this book from the beginning. The siblings were always coming up with amusing plans and dangerous endeavors. Life on 141st Street is magical. Thank you, Karina Yan Glaser for a beautifully written story. I will cherish always cherish this book.

When you finish reading this book, you won’t want to miss the next two in the series!

–The Vanderbeekers and the Hidden Garden

– The Vanderbeekers to the Rescue

The Bronze Bow* by Elizabeth George Speare
Reviewed by Stephanie S., Age 15
It was dark and damp. He had walked the long trip after a hard days work, and he was tired. Rain soaked him and left his clothes clinging heavily to his body, but he wasn’t going to stop because he had an important message that must reach the Rabbi. Upon arriving on the crowded lawn, he waited for what felt like hours just to talk to the Rabbi, but it seemed he would not make an appearance tonight.

Most of the followers had left, then, when he had given up hope, the window above his head opened and a voice called out, “Who’s there?” Daniel showed his face and Jesus said, “Come up, my friend.”  Daniel told Jesus about the two things in his life that mattered most – freedom for his people and vengeance against the Romans for his father’s death.
Jesus spoke of love, and asked one simple thing, “I would ask of something much harder (than fighting for me), I would have you love for me…you must give up your hate.”
Loving was a new concept for Daniel. But Daniel is not the only one with this problem. The problem is mine – and probably yours too. We tend to hate people, circumstances, and sometimes ourselves. Daniel is eventually willing to love his enemies, the Romans. But what about us? Will we be able to give up our hate and pride, love our enemies, and save our country by loving more? 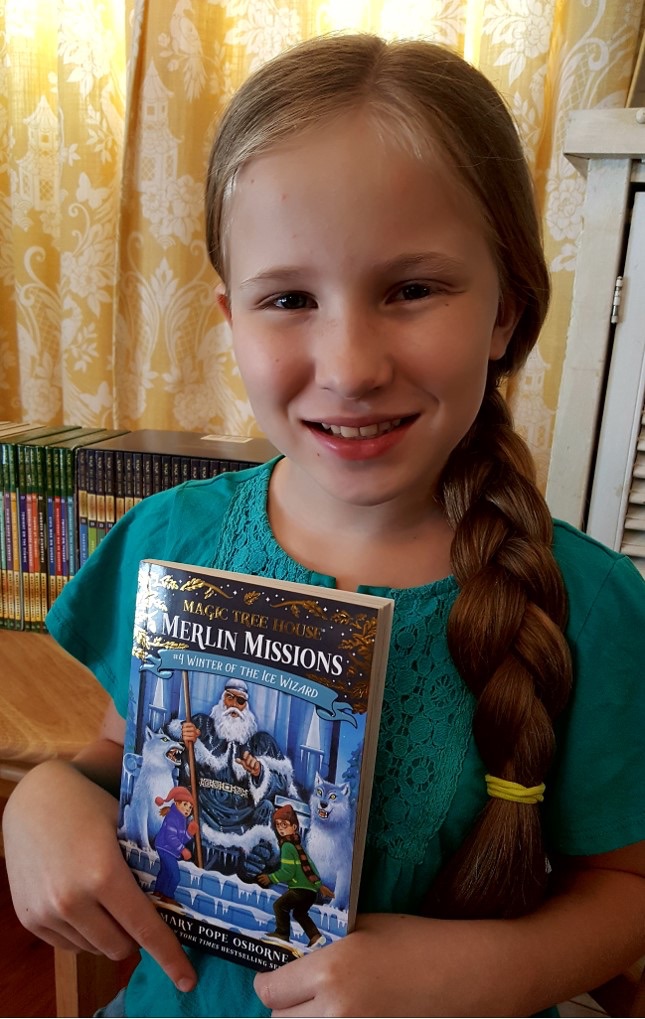 In Winter of the Ice Wizard,Jack and Annie use the magic tree house to travel to the Land-Behind-the-Clouds. The Ice Wizard of the land has kidnapped Merlin and Morgan Le Fay.
The evil Ice Wizard has Merlin’s Staff of Strength and will not return it unless Jack and Annie retrieve his missing eye. In Jack and Annie’s quest they flee from wolves, discover the truth of the Frost Giant, and meet the Swan Maiden.
I enjoyed the adventure and mystery of this book. The book encourages brothers and sisters to work together and care for one another.
Osborne, Mary Pope., and Sal Murdocca. Winter of the Ice Wizard. Scholastic Inc., 2017.

The story begins when Sarah Wheaton, a plain and tall lady from Maine, answers an advertisement Papa made for a a wife and mother for his two children. Caleb and Anna write to ask if she sings like their mother did. She answers that she does. Sarah comes for a trial period to see if she likes it at Papa’s farm. Along with her cat, Seal, Sarah stays for a month. Although she misses the sea, she eventually decides to stay.

I thought this book was incomplete if you don’t read the rest of the series. Patricia MacLachlan does give us a good idea about life in the prairies of America in the 1800s. I recommend this book to anyone willing to read all three: Sarah, Plain and Tall, Skylark, and Caleb’s Story.

The Witch of Blackbird Pond* by Elizabeth George Speare

Be careful that what you perceive is

Not what the world leads you to believe

Even one made with digression can cause you to mislead

It can plant the gossip seed

If you are not careful and others are not ware full

A jewel of a person may be buried like treasure

May you go to every measure to uncover that treasure

Get to know their inner being

It may be different than what you’re seeing

Before you make your decision

Learn about them with precision

The Whipping Boy* by Sid Fleishman

Prince Horace, also known as Prince Brat, decides to run away. With Jemmy, his whipping boy, the two set off on a daring adventure. Shortly into the journey, they are kidnapped by two scalawags! Can they escape? Can Jemmy lead them safely through the sewers? Will they ever get back to the castle?

The Whipping Boy is short, but well written. It’s funny and has good subplots of friendship and trust. It’s ideally suited for grades 3-5, but also appeals to middle schoolers.

A Frog Thing is a book about Frank the frog. The author of this book is Eric Drachman and the illustrator is James Muscarello.  In this book, Frank really wants to fly and sets his mind to do it. But he is a frog, and frogs don’t fly. In the end, Frank’s dream comes true!

I thought this book was funny and cute. Sometimes I felt sorry for Frank because everyone was laughing at him.  But he had great ideas and I thought they were unique.

This book shows when you keep trying, never give up, and use some creativity, you can do new things. I would recommend this book to others because it teaches to be creative and that you don’t have to be like everyone else.

The Adventures of Tom Sawyer, by Mark Twain

They came from the pirate, the Indian, the boy, Tom Sawyer.

‘Thomas Sawyer’ when he’s in trouble, ‘Capt’n Tom’ when he’s a playin’.

Most of all, “Thomas Sawyer!” rings through the air, but only when he’s caught.

For he’s sly as a fox, that thief, pirate, injun, boy, Thomas Sawyer.

Reviewed in Poetry by Alison B, Age 13
Through My Eyes
To an orphaned child, a fragile soul
Home is the reeking alley, the dirty haystack
Parents are the easily angered employers, the administrators of
beating
Food is the stale crumb, the putrid chunk of meat
Water is the drop that falls from the sky and caresses the swollen
tongue
Clothes are the meager rags that hang off of a skeleton body
Money is the object that is of highest importance, though not
often possessed
God is the unseen friend of the rich, the oppressor of the less fortunate
Love is he unfelt emotion, seen but not experienced
Happiness is only found in taking it from others, in the form of stealing, sneaking, looting, spying
Hurt is the bruise on the back, the wounds of a crushed heart
Life is a drudgery to be endured, hoping on day to be rescued
from it by
Death, which is the hope o the abandoned child, who prays that death in body
Will end the physical torture of one who is already
Dead inside, a rotting soul masked by the life of youth

The Door Within, The Rise of the Wyrm Lord, and The Final Storm  by Wayne Thomas Batson

These books are an amazing blend of fantasy – complete with knights and castles – and modern-day realism. I love this series because Mr. Batson uses it to communicate the gospel of Jesus Christ and God’s plan of salvation.

Aiden’s family has moved across the country to live with his aging Grandpa. Every night Aiden has nightmares about black knights and a benevolent King. In the dreams, a powerful man with red eyes tells Aiden they could rule the world together. All Aiden has to do is deny the King. Grandpa seems to understand the meaning of Aiden’s dreams. Aiden discovers he can travel into the realm of his dreams by way of three scrolls he finds in Grandpa’s basement. He goes on an amazing adventure in which he makes close friendships, learns to sword fight, and even fights dragons. Aiden also learns about the one true king, Eliam.

The Door Within trilogy has endearing characters who will make you laugh, as well as a message which reaches into our world. I love it!

The Rattlebang Picnic by Margaret Mahy

In The Rattlebang Picnic by Margaret Mahy, Jack McTavish and Marion McGillicuddy get married and decide to buy an old rattlebang and have a bunch of children instead of a new and expensive car and no children. The McTavishes are a happy family and they have many great adventures with Granny McTavish. In the end, the McTavishes learn that children are more of a blessing than they could ever imagine!

This is definitely my all time favorite book!

Path of the Novice by R.K. Lander

A fantastic read! The characters in this story are well thought out and believable. I fell in love with them instantly.
R.K. Lander did a brilliant job having her main character, Fel’annar, deal with racism and self-worth throughout the story. Readers can relate to these issues and are easily drawn into her struggle.
My only criticism has to do with the names of the characters. They were difficult to pronounce and some were given additional names which was confusing.
The plot is original and engaging from the start. The first chapter throws readers right into the action along with the warriors of the kingdom.
A wonderful and exciting read. I give Path of a Novice 4.5 out of 5 stars and am looking forward to the sequel.
Lander, R. K. Path of a Novice. 2017.

Sierra Peterson loves to dive into books, whether reading or writing them and can often be found in her book corner with a hot cup of coffee. But when she’s not there, she can be found playing guitar, having coffee with friends, or planting flowers in the greenhouse where she works part-time.

Bible Characters Through the Ages, by Jann Martin

A review by Janice C. Garey

This book takes children back into the Bible story of Adam in the Garden of Eden via a homemade time machine. The story, nicely paced, can be either read alone by the child, or a parent or sibling could read it to younger children.

I believe it would be best to first build a foundation for the child in the true Bible story before reading this story in case a child might have trouble discerning what are the facts and what part is fictional. This applies more, of course, to younger children than to older ones. The story is really good to help the child consider what it would have been like to experience the Bible story personally.

It seems some children have a jumble of Bible stories in their head, perhaps from sporadic attendance at church, so this book series is perfect to dispel confusion as to sequence of the Bible stories if the books are read in order. A timeline project could be set up to give more learning value and hands on experience with the series.

Jann W. Martin—author, teacher, speaker and blogger— Her dream is to captivate the hearts of children, by writing stories that teach them of the Bible through the eyes of a child. She has a B.A. from Michigan State University, Commissioned, Associate in Ministry from Trinity Lutheran Seminary. You can join her at www.jannwmartin.com, Facebook, Pinterest, LinkedIn, Twitter and Google+

From the Bedtime Devo Mama